What an intense weekend of competition, one filled with twists and turns along the way. A big shock was the all American Sanctuary team final where no EU team was able to muscle their way in with Team Liquid taking the honours.  Most importantly for us here at Myztro Gaming was our first Major victory this weekend. Not only did one of our fantastic young talents win the Duel competition at DreamHack Denver, Myztro Gaming dominated the podium with three of the top four players all hailing from our organisation. A fantastic result we hope to replicate in coming tournaments.

Everything comes down to this. We proudly present our Duel Grand Finals: @myztrogarpy VS @myztroraisy Winner earns $14,000! #DHDEN17 #Quake pic.twitter.com/YwYCMZc5gv

With $35,000 on the line this weekend for those battling in the Duel category, there was plenty to play for. It came down to an all Myztro grand final between Adrián “Raisy” Birgány and Gareth “GaRpY” Marshall in what ended up as a 3-0 victory for Raisy. It also has to be said Michael “Dooi” Dewey also had a fantastic result playing 3rd-4th in his first major tournament as a Myztro player, after falling to Raisy in the semi-finals. 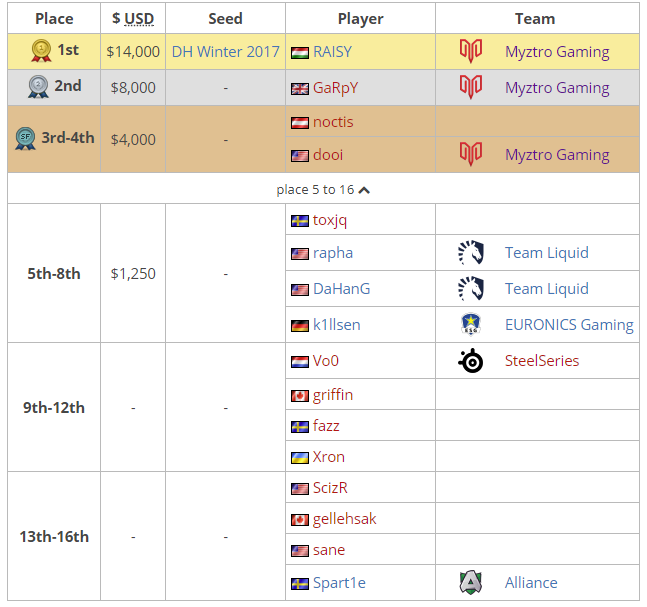 There were some surprising results with big names getting knocked out early, you can click here for a full breakdown of group and bracket play throughout the weekend.

DreamHack Denver 2017 was one of two Quake Champions competitions announced by organisers DreamHack. The Winter Competiton set to take place in early December and held in Sweden. Look forward to seeing Myztro players in action once again then.

It was a fantastic weekend for everyone involved, a big thank you to everyone who supported the team while they were out in Denver and once again to DremHack for throwing a fantastic event! Join me in congratulating our Quake players and wishing them luck for future and further glory.

Not a perfect game, but a great one nonetheless.

Shut out on Ruins. Can @myztroZenAku go all the way?

@myztroZenAku heads into the first #QuakeProLeague featured matchup of the day against @SIBquake. LET'S GO!