So it’s time for me to interview the second Myztro double heading out to Dreamhack Tours, the local boys Aaron “HELL” Jones and Gareth “GaRpY” Marshall. These guys have been playing quake for years and have been rivals and friends for most of that time. Now at Myztro, they find themselves brothers in arms and it’s a beautiful bromance we get to watch blossom each day.

It’s hard to split these two up (their girlfriends will tell you!) be it at a LAN event, a community gathering or even at a party. With Tours fast approaching I managed to squeeze in my interview after our UK Quake Champions players were done scrimming some of the US teams.

Ok lads, thanks for sitting down with me.

Hell: Just don’t use any pictures that make me look like an absolute *******.

That’s going to be tough.

Right then Aaron I’ll start with you. 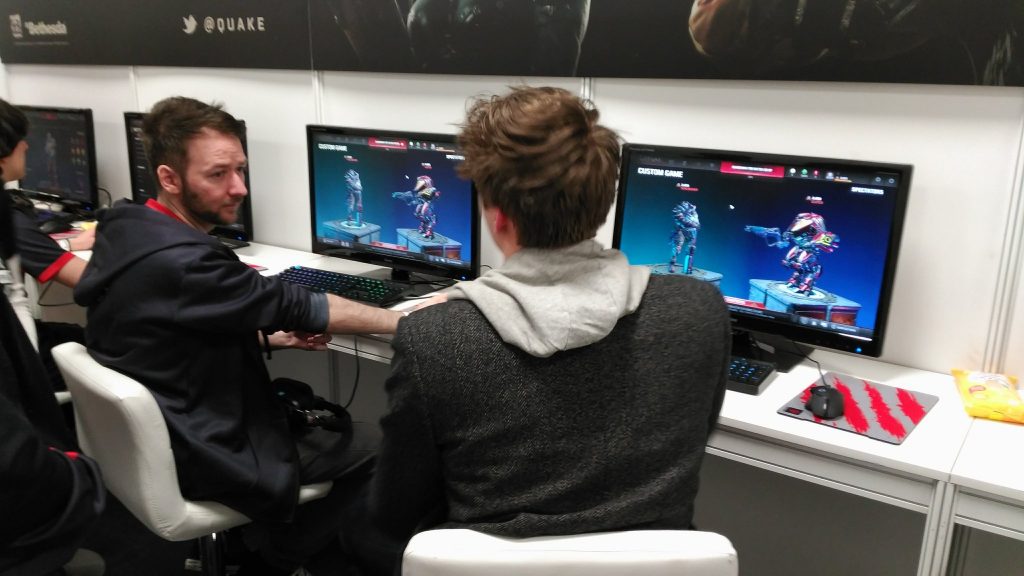 Aaron “HELL” Jones showing the public the ropes at PCGWeekender

I’m going to use the same questions as I asked the others, keep it nice and simple and most importantly quick so you guys can get back to LAN prep. Can you introduce yourself, please?

Hell: I’ve been playing competitively since I was 14 years old. Won my first LAN aged 14 at a Quake 2 tournament in Middlesborough, For Legends Only. I reached a high level in Quake 2 where I could call myself the best dueller in the UK as well as participating for Team UK in many Nations Cup tournaments. I then switched from Quake 2 to Quake 3 where the journey started all over again, in 2001 I won the CPL UK Qualifier in London, again represented Team UK at ESWC 2004. Regularly placed between 1st-3rd in many UK tournaments & WCG Qualifiers. Then Quake 4 came along and this is where I wanted to push myself further but not just that I wanted to establish myself as the best in the UK, again. I started slowly in Quake 4 but it was probably my best Quake. Again reaching 1st-3rd at many UK events and ESWC Qualifiers as well as winning Clanbase EuroCup XVI, and a decent showing at WSVG Dallas only to lose to Toxjq, to then at the last international tournament for Quake 4 I placed 7th at i32, but on the way beating GaRpY and 2GD to establish myself as the best UK Quake 4 player. Then came QuakeLive and to be honest I had no interest in playing Quake 3 so to speak again but participated briefly. In doing so I won the first ever ESL Quakelive Cup and reached the EPS Grand Finals in London only losing to teammate GaRpY and afterward I stopped playing, that was 2009. But then I heard about Quake Champions and thought of coming back and trying my hand at Quake once again.

Hell: Quake for me has been a part of my life since I was a kid, there is no other ultimate first-person shooter out there that can rival the pace and skill required to play Quake. So when I compete, I want to compete with the best, in the best (in my opinion) the first-person shooter. It is the only game that has continued to keep me coming back for more, you can love or hate any version of Quake but we can all agree, it has a hold over most of us, especially if you were brought up on it.

Not top for once @myztroraisy – But its good to be No.1, all this hard work has paid off, I got to say, I’m extremely proud of it. I’d like to thank @myztrogaming & @myztrogarpy for making this dream come true 😂 @Quake pic.twitter.com/pSmAzNeaee

We like a bit of banter in the #MyztroFamily

Where does Quake fit into your life now?

Hell: I think I covered it briefly in question 2, it’s just the ultimate competitive first-person shooter and being competitive myself is the main reason I continue to compete. It’s a struggle to fit it into my life, especially now that I am a little bit older and I work full time, but its worth it, I make time.

Ok next could you tell us how you’ve kept motivated for so long, something every veteran in esports has had to find to keep going and keep improving?

Hell: For me, I had to find different reasons to stay motivated like for example I would conjure up some sort of rivalry (unbeknown to them) to help maintain motivation. For example in Quake 2 there was a very known top English UK player called blokey, so my motivation was to get as good as him and then to eventually beat him. The same thing happened in Quake 4, I saw how good 2GD was doing at the start of Quake 4 and that was my motivation to get good, to in the end become better than him or even to just beat him at UK LAN events, fortunately for me, I got to do that. So you can see the cycle, then GaRpY came along and being such close friends as well as teammates it was heightened to another level, we tend to push one another in a lot of ways. So you can say over the years I just wanted to be recognised as one of the best in the UK at Quake, my motivation was to become that. And lastly, I think its just the love for the game itself, the only reason I keep playing and keep coming back.

I think that’s good self-motivation right there, ok how do you prepare for LAN events like Tours in a few days?

Hell: No special routines, just a structured practice regime, several hours a day leading up to an event. But as I’ve always said to GaRpY (which he thinks I’m talking absolute rubbish of course) is that I play better or I improve more when I actually don’t play as much, I feel sometimes you can practice too much to the point you’re not learning anything anymore, as you’ll get into a bad habit of just continuing to do the same thing over and over, the same playstyle over and over. But if you take a step back, have a breather and then go back into the game with a clear mind, you see things differently, start to play slightly different and adapt more. So yeah a few hours a day, nothing crazy.

Ok last question before we move on to GaRpY, how do you feel about Tours and your chances there?

Hell: If you asked me this question a month ago, I would have felt extremely confident, not to win it, but to get top 4-6 for sure. We’re under no illusion, we know what we’re capable of and what our standard is right now and more importantly what we need to work hard on, but saying that, oh man, we’re probably in our worst shape going into an event. I think we’d be happy just getting through day 1, haha. But we remain silently confident in our own ability and you can be sure come Dreamhack Tours we’ll be giving it our all for sure.

Thanks, Aaron and I speak for the Myztro family when I say we have confidence in the two of you. Ok GaRpY, your turn! Right question 1, introduce yourself. I think our readers have by now realized we in the UK like to talk a lot! 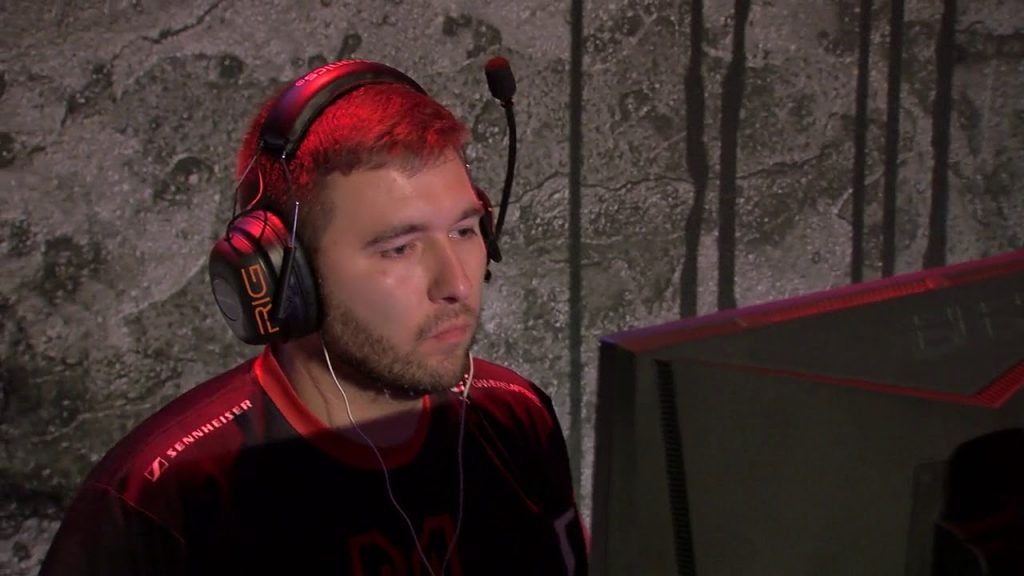 Ok Gareth, could you introduce yourself for those who don’t yet follow the competitive Quake Champions scene?

Garpy: Hello my name is Gareth “GaRpY” Marshall, and I play for Myztro Gaming. I have been playing professional for 14 years and have played quake for about 6 years. Since I started playing professionally I have been Ranked World No.1 in half-life, Won several UK LANs in Quake 3/Quake 4/Quake Live/Painkiller/UT series. But most recently In Quake Champions, I came 2nd at Dreamhack Denver 2017 and then at my next event which was ESWC I was crowned world champion and to be the first UK player to ever do this has got to be the best moment in my esports career.

It was an incredible moment for us watching and UK esports as a whole that’s for sure. Brilliant ok next question, why does Quake Champions tickle your pickle?

Garpy: I have chosen to compete in Quake Champions over any other titles because my great love is fast-paced FPS shooters which have competitions in Duel and Team Modes, so it was an easy choice for me to make.

Short, sweet and on the point. I know you run a family business which you are still helping with but how do you manage to fit competing in esports into all that?

Garpy: Why do I compete and how does this fit in my life… Well, this is an easy question to answer and that’s because there is no feeling better than being on that big stage in front of thousands playing your heart out… and this and been a big part of my life since I turned professional 14 years ago and hopefully many more years to come! When you have this feeling and desire to experience it, again and again, work schedule is no obstacle…you make it happen.

Clearly where there is a will there is a way. Ok, we’re nearly there just two more questions, from what you’ve said I probably don’t need to ask this, but is staying motivated playing Quake day in and out a problem?

Garpy: Staying motivated to one such game is pretty easy when you competing at such a high level and to keep there you have to practice and when you enjoy the game as well it makes it easy

It’s good to see you are both on the same wavelength.

Hell: He’s just copying me because he loves me. 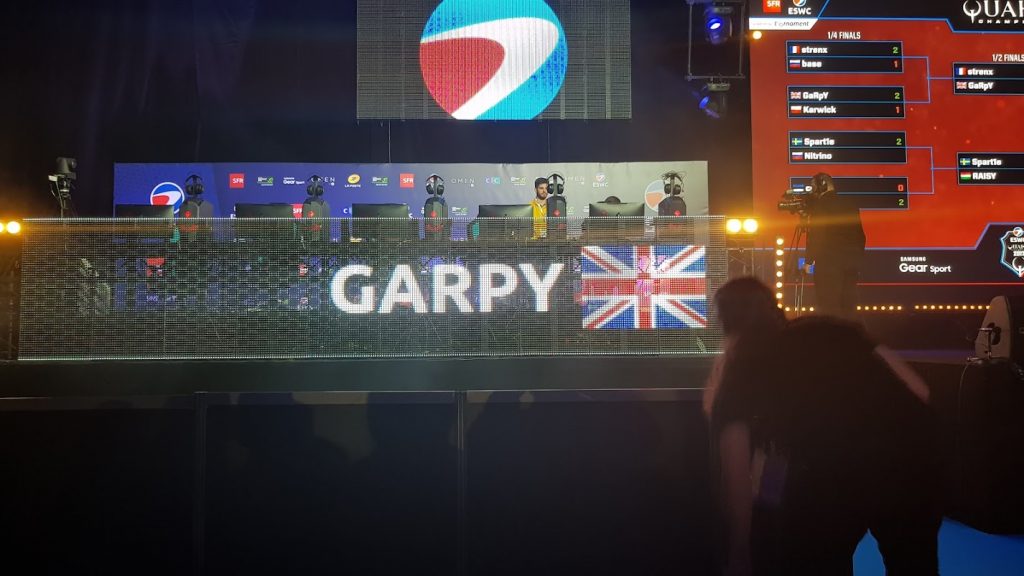 Do you have any special routines or superstitions that you call upon for big events that you may call upon in the run-up to DreamHack Tours?

Garpy: I don’t really have any special routines to get ready for events, other than practice hard and just get mentally ready and just give it your best, just make sure you don’t put to much pressure on yourself and enjoy the experience.

Last but not least, how do you feel about your chances at Tours?

Garpy: Well… let’s put it this way if miracles can happen it needs to for us to win (laughing). But I ain’t writing us off because if we actually play with a bit of teamwork we can cause some upsets, mostly, however, it’s been a while since the last Quake Champions LAN and I’m itching to get back to competing again and doing so in 2v2 has got me pumped.

Thanks lads, I can’t wait to watch you compete and I wish you both the best of luck over the weekend.

Make sure you follow Myztro Gaming on Twitter for the latest updates on DreamHack Tours progression and other team news.

All of our Quake 2v2 teams have arrived @DreamHack Tours, safe and well.#QuakeChampions pic.twitter.com/7GABEy0pWd